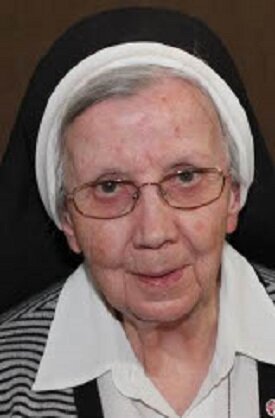 Please share a memory of Sister Jeremiah to include in a keepsake book for family and friends.
View Tribute Book

Sister Jeremiah (Theresa) Collins embraced Sister death on January 27, 2022 at the Franciscan Villa in Syracuse, NY.  Sister was 93 years of age and had been a Sister of St. Francis for 70 years. She was born in Rochester, NY to Jeremiah J. and Mary O’Connor Collins. Sister was a member of Holy Apostles Church in Rochester, NY. She attended Holy Apostles Grammar School and graduated from Nazareth High School. In 1950, eight years after her older sister, Sister Mary Lourdes, she entered religious life. Theresa was invested with the Franciscan habit in 1951.

Sister Jeremiah did her undergraduate work in Humanities at Le Moyne College and earned a Master’s Degree in Business Education from Marywood College in Scranton, PA.

Sister’s ministry began with teaching CCD classes at St. Mary’s in Baldwinsville for one year, followed by teaching seven years at St. Daniel’s School in Lyncourt. For the next eleven years Sister taught in both elementary and high school at Assumption Academy in Syracuse. Her next mission was to Oswego Catholic High School where she served in the Business Department and later assumed the position of vice-principal.

In 1977,  Sister was appointed Secretary General of the Sisters of St. Francis, a position she held for ten years after which she was elected Council Member on the Leadership Team of the Sisters of St. Francis and Assistant to the Superior General. Sister Jeremiah next gave clerical assistance in the community’s finance office. Lastly, Sister was a prayer minister at the Franciscan Villa in Syracuse.

Sister Jeremiah was a prayerful, devoted servant of God who performed her tasks with great devotion and joy. She was a warm, kind person possessing a wonderful sense of humor and a hearty laugh that brought smiles to all. She will be dearly missed.

Sister is predeceased by her parents; brother, John Collins and sisters, Mary Collins Dunham, Helen Collins and Sister Mary Lourdes Collins.  She is survived by the Sisters of St. Francis, and several nieces and nephews.

A private Mass of Christian Burial will be held at the Franciscan Villa, 6900 Buckley Road, Syracuse, NY. Interment will follow in Assumption Cemetery. Livestream will be available beginning 11 am Thursday at facebook.com/TINDALLFH

In lieu of flowers, donations may be made to the Sisters of St. Francis of the Neumann Communities, Congregational Development Office, 225 Greenfield Pkwy., Suite 208, Liverpool, NY 13088 or sosf.org

Share Your Memory of
Sister Jeremiah
Upload Your Memory View All Memories
Be the first to upload a memory!
Share A Memory