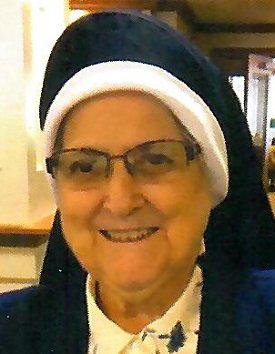 Please share a memory of Sr. Mary Irene to include in a keepsake book for family and friends.
View Tribute Book

Sister Mary Irene Zegarelli, age 90, went to her eternal reward on Sunday April 18, 2021, at the Franciscan Villa in Syracuse, NY. Sister was one of three children born in Utica, NY, to Vincenzo and Maria Carmine (Fiore) Zegarelli. She was a member of St. Anthony Parish in Utica and attributes her religious vocation in the following words, “Through the grace of God, my beloved parents and the example of the Franciscan Sisters, I realized God's call to His service”. In 1948 she was received into religious life and spent 72 years in God's service as a Sister of St. Francis of the Neumann Community.

The first few years of Sister's ministry were spent in community service assisting her Sisters at St. John the Baptist Parish in New Brunswick, NJ and St. Anthony Motherhouse and Convent in Syracuse, NY. She went on to a new ministry in 1958 and spent thirty-nine years caring for and teaching Catholic school children in Utica, Syracuse, and Albany, NY and also Riverside and Camden, NJ. In 1993 Sister felt a calling to the ministry of Pastoral Care and devoted her attention to those suffering illnesses, giving them and their loved ones comfort, counseling, spiritual guidance, and support. She served devotedly as a pastoral care giver at St. Elizabeth's Hospital in Utica, NY, where she eventually became Co-Director of Pastoral Care services in 1998, a position she held until her retirement is 2014. Sister was truly a "people person". She loved those to whom she ministered and received abundant love in return.

Sister Mary Irene was prayerful, compassionate, generous, thoughtful and kind. She worked diligently at every task assigned to her. She especially enjoyed decorating and did so beautifully for each special occasion. She had a wonderful sense of humor, loved sports and good food. While at the Villa she could always be found in the activity room playing her favorite games and she never missed an opportunity to go out and about on the van.

Sister is predeceased by her parents and her brothers, Pasquale Zegarelli and Remo Zegarelli.

A private Mass of Christian Burial will be held at the Franciscan Villa on Friday, April 23, 2021. Interment will follow at Calvary Cemetery, 2407 Oneida Street, Utica, NY. Livestream of the Mass will begin at 8am Friday at facebook.com/TINDALLFH and may be viewed anytime after.

In lieu of flowers, donations may be made in Sister Mary Irene's name to the Sisters of St. Francis of the Neumann Communities, Mission Advancement Office, 960 James St., Syracuse, NY, 13212.