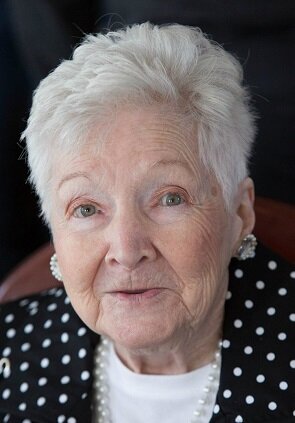 Please share a memory of Frances to include in a keepsake book for family and friends.
View Tribute Book

Frances E. (Dolan) Lynch, 103, a lifelong resident of Syracuse, passed away on June 4, 2022. Frances was born in 1919, and when she was a young child, lived with her foster parents James H. and Mary Ellen (McAuliffe) Sheehan, whom loved her dearly. Her love of music started with “Uncle Jim” playing the accordion when she was a toddler. She remained close to them throughout her life, along with her father, grandmother and her favorite aunt, renowned antique doll collector, Gladyse Hills Hilsdorf.

She credits her longevity to walking five miles each week day in her late teens from Hurlburt Road to downtown Syracuse to attend secretarial school. After working as an executive secretary for several manufacturing companies, she landed a job with the City of Syracuse’s water department. Her one regret was when she quit work to travel 900 miles to her wedding, she left behind her favorite raincoat in a closet at City Hall.
Frances met her future husband Hugh Joseph Lynch when she went out one evening in 1941 with friends from the secretarial pool to the Rainbow Lounge at the Hotel Syracuse. Engaged during World War II, their wedding was held at Fort McClellan’s Piney Wood Chapel in Anniston, AL. She took a train to Buffalo to meet another bride-to-be. Having never met each other, Frances, measuring 5’ 3” in heels, wore a large feather in her hat so she could be identified in the Buffalo train station by her traveling companion. Since Frances didn’t know how to drive, she rode shotgun all the way to Alabama to the double wedding. Her brother Alfred Dolan was the only family member able to attend, surprising her at the chapel. Living quarters was quite limited on the barracks, so Al spent the night sleeping in a bathtub.

Frances had an immense love of poetry and puns, and prior to the age of Google, she would delight in reciting everything from Tennyson and Shakespeare to quipping her favorite puns.

She loved travel with her husband Hugh and would spend the year planning their vacations. Among the most memorable vacations were spending summers at Holl’s Inn on Fourth Lake in the Adirondacks, and trips to Hawaii, Bermuda, Ireland and visiting grandchildren in California. No matter the destination, she was always happiest upon returning home to Syracuse!

She enjoyed visiting her Aunt Gladyse and her stunning collection of Blue Ribbon-winning porcelain dolls. As a tribute to her favorite aunt, Frances collected dolls later in life, albeit on a far more modest scale.

She was an avid gardener who enjoyed summers in her back yard tending to her rose garden, as well as the African violets that adorned her kitchen windowsill.  In fact, she had so many plants that she installed a window-box in the kitchen to showcase them.

Frances and her mother did not have a traditional mother/daughter relationship but Frances loved her unconditionally. How do we know?  Well into her late 90s, Frances kept a photo of her Mom tucked deep inside her wallet, proof that the need for a mother’s love never dies. Her children, grandchildren and great-grandchildren loved her deeply and will miss her greatly.

Services: 11 am Friday June 10, at St. Charles Church where A Mass of Christian Burial will be held. Livestream will begin at 11 am at facebook.com/TINDALLFH Frances will be laid to rest next to her husband of 57 years at the family plot located in section 73 of St. Mary’s Cemetery, DeWitt, NY. A calling hour will be 10 am to 11 am Friday June 10 prior to the Mass at the Church, 417 S. Orchard Rd., Syracuse.

Donations in Frances’ memory may be made to CNY Cat Coalition www.cnycatcoalition.org/donate/ or to a charity of your choosing.