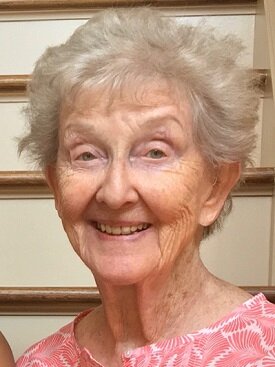 Dear Jack, Cathy and Connie: Sincere condolences are extended to you and your families upon the passing of your mother. She was the ROCK of the JDHS front office. She protected the sanctity of Principal Richard McGee's Office. She put up with every ill-manner kid waiting in the "holding cell" to see Mr. McGee, Mr. Wall, Mr. Hogue, Nurse Jane or Mrs. Geiss. Unlike the character portrayed by the late Alice Ghostly in "Grease", Mrs. Connie Conger never needed a xylophone to get the student's attention for morning announcements. She was seen at times, rolling her eyes behind Principal Richard McGee's back and really making faces and rolling her eyes when Mr. Bob Wall took the microphone. Mrs. Conger was to first one to purchase ANYTHING the students were selling in support of either the Music or Athletic programs. In 1969 when the Chorus was purchasing red cummerbunds and red vests to sharpen the appearance of the Concert and Select Choirs, Connie purchased 2 CASES of "REX" detergent. She also purchased countless stale, expensive chocolate bars, girl scout cookies, boy scout popcorn or whatever the students were hawking at that moment -- always with a smile of support. She was a pillar of support, loved her children and their families without reservation but not opposed to calling out Jack in front of his buddies. Rest in Peace, Mrs. Connie Conger. You will be missed by everyone's lives you touched. Warren Abrahams, Jamesville-DeWitt High School Class of 1972.
Please wait
Share Comment
G
Gary martini posted a condolence
John and family So sorry to hear about your mom. She was always fun st JD and a great neighbor. Im sure you will all miss her. Gary Martini and Family
Please wait
Share Comment
S
Sherry Meltzer lit a candle

Sincere Condolences to the Family, Sherry Meltzer, JD Class '72
Please wait
Share Comment
T
Tom Muench posted a condolence
Cathy , Jack, Connie, My thoughts and prayers are with you. Your mom is the best. She ran our high school with ease and kindness. She was vital to everyone in the building. You kids are so important to me. We are in Florida so I will not be able to be there during this difficult time. It breaks my heart that I cannot be there. Be sure to know that your mom will always be part of you. She is so proud of you all. Your lives reflect that she is one of the best mothers in the world. With all my love Tom Muench
Please wait
Share Comment
C
The family of Constance B. Conger-Sofia uploaded a photo