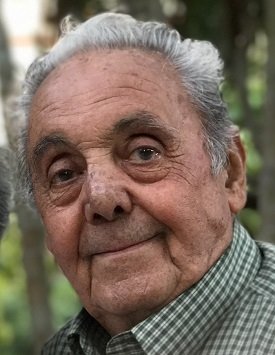 Please share a memory of Peter to include in a keepsake book for family and friends.
View Tribute Book

Pietro “Peter" Convertino, 92, of Westvale, NY, passed away peacefully at his home on August 2, 2021. Peter was born at home in Syracuse, NY in 1929. At one and a half years old, Peter and his family moved back to Bari, Italy. In 1948, Peter returned to the United States, where he started to forge his life back here. Peter was a US Air Force Veteran where he discovered his talents. He then was self-employed in a business he started, Miracle Food Service until he retired. Peter met his future bride at a St. Brigid’s Festival. A beautiful union was formed and enjoyed dancing with his wife of 66 years, Virginia and with many family memories.

Peter was predeceased by his parents, Samuel and Anna Convertino and his brother, Gabriel Convertino.

Peter is survived by his wife, Virginia (Martone) of Syracuse. They gave life to three beautiful children. Mary Ann (and Dan Bianchi); Anita (and Mark Okazaki) and Samuel (and Anita Dayal). Also, blessed with four grandchildren, Miguel, Antonio, and Sylie Convertino and Joshua Bianchi. They are parishioners of St. Charles Parish. Peter is also survived by his older sister, Angie Lattanzio, Eleanor DeCarlo (his sister-in-law) and numerous other cousins, nephews and nieces.

Services: 10am Friday August 6, at Tindall Funeral Home and 10:30am at St. Charles Church where a Mass of Christian Burial will be celebrated. Burial with military honors will follow in St. Mary's Cemetery, DeWitt. Calling hours will be 4-7pm Thursday August 5, at the funeral home, 1921 W Genesee St. Syracuse.

In lieu of flowers, contributions may be made to Covenant House (covenanthouse.org) or St. Jude’s Children’s Hospital (stjude.org)