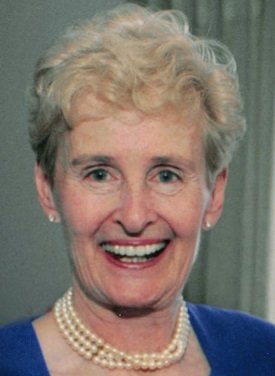 Janet Walsh Connor, 90, passed away Tuesday at Crouse Community Center in Morrisville, NY. A lifelong resident of Syracuse, Janet was born July 19, 1931, spent summers on Tupper Lake with her three siblings and their maternal aunts, and graduated as valedictorian from St. Anthony of Padua High School in 1948. She earned a scholarship to St. Joseph’s College of Nursing and worked for the Red Cross as an RN.

Janet married Marty Connor on January 30, 1954, and raised six children at their home on Geddes Street. In 1967 they moved to Onondaga Hill where they welcomed a seventh child. As an adult, Janet earned an additional degree at Onondaga Community College and became a licensed insurance broker, assisting Marty with his insurance business.

Janet enjoyed skiing in New York and Colorado and was one of the first investors at Labrador Mountain Ski Area. She was an avid tennis player at Pine Grove Tennis Club in Camillus, on the court at her home, in the National Senior Games, and was a devoted gardener: her six-foot, deep blue hydrangeas were her particular pride.

Janet was a Eucharistic Minister at St. Michael’s Church on Onondaga Hill; prior to that, she was a communicant of St. Anthony's and then Our Lady of Lourdes parishes. She volunteered at Francis House, a home for persons with terminal illnesses, and frequently encouraged her children to donate to its mission rather than buy gifts for her.

Throughout her life, Janet was a blessing to her family and friends, hosting many family and church parties, school field trips, and tennis gatherings at her open and welcoming home. Her big bright smile and sweet voice will be missed by everyone who knew and loved her.

Services: Calling hours will be 5 to 7 pm Monday, July 26 at Tindall Funeral Home, 1921 W. Genesee St., Syracuse, NY. A Mass of Christian Burial will be celebrated 10:30 am Tuesday, July 27 at the Church of St. Michael and St. Peter, 4782 W. Seneca Turnpike. Burial will follow in Onondaga Valley Cemetery. For livestream of the Mass click www.youtube.com/c/churchofstmichaelstpetersyracuse

Flowers may be sent to Tindall Funeral Home and donations may be made to Francis House, francishouseny.org