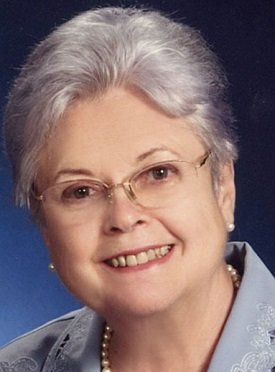 Please share a memory of Joan to include in a keepsake book for family and friends.
View Tribute Book

Joan Louise Wood Coulter, 93, died March 11, 2021. She was born in Phoenix, NY to Robert M. Wood (of Wood’s Meat Market) and Cassie Wells Wood in 1927. She graduated from Syracuse University in 1949 with degree is Fine Arts, Interior Design and was a member of the Alpha Gamma Delta Sorority. Joan was to travel out to pursue a degree in medical illustration however, 71 years ago she met and married husband Robert Coulter.

Though her career goals changed, she had a very fulfilling life. Joan’s work experience included retail merchandising, employment of her artistic skills by the Corson Photography Studio, and legal receptionist. She was active in the Episcopal Church as organist and treasurer for many years.   Joan was one of the organizers of the Phoenix Co-Op nursery, very involved with the PTA and a Camp Fire leader. She taught rug hooking for many years and won awards at the NYS Fair. She enjoyed memberships in Central New York Rug Craft, the Onondaga Garden Club, the Schroeppel Historical Society, and the Topics and Century Clubs which benefit the Phoenix Library. Her fund raising drives included the American Cancer Society, Red Cross, Muscular Dystrophy as well as many local community groups. She was a 5 star member of the Phoenix Library Board and took an active part in realizing the new Phoenix Library. She enjoyed Masonic activities and maintained membership in the Daughters of the Nile and the Eastern star. Joan was also the Village of Phoenix Women of the Year in 1989. While residing in the township of Lysander, Joan was very active in politics serving as a committee woman and the historian for the North Republican Club of Onondaga County.

As a lifelong learner, Joan’s true passions included genealogy and our great country’s history and future. Her ancestry goes back to the early settlers of America, the French and Indian Wars, the Revolutionary War, the War of 1812, and the Civil War. Her father was in the first class of the New York State Troopers Calvary Division. She was able to share and continue learning as a member of the Betsy Baldwin Chapter of the Daughters of the American Revolution.

Throughout Joan’s life, she enjoyed extensive travel with family and friends, summered on the family island in Canada and enjoyed warm winters in Boynton Beach, FL where she settled fulltime.