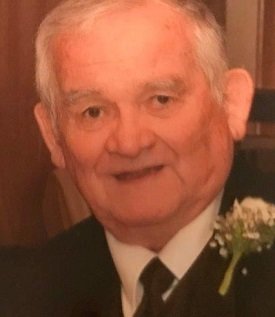 Please share a memory of Richard to include in a keepsake book for family and friends.
View Tribute Book
Richard “Dick” C. Durant Sr., 87, of Syracuse passed away on May 4, 2020 after a brief illness at Upstate Hospital. Dick graduated from St. Anthony of Padua High School in 1951. He was veteran of the United States Navy and served in the Korean War. Dick worked for 35 years and retired as district manager of Cortland County Niagara Mohawk offices. Dick enjoyed coaching his children’s sports teams including baseball, softball and basketball. He was an active member of the Southside Business Men’s Association and past president of the Valley Men’s Club. Dick was an avid golfer and sports enthusiast at his grandchildren’s sporting events. Dick was pre-deceased by his parents Charles and Gertrude Durant and his brother Thomas. Dick is survived by his wife of 64 years, Mary Lou Durant (St. Julien), his children Amy (David) Ranalli of Emporia KS. Margaret (John) Fleischmann of Lafayette, Richard (Katherine) of Syracuse and Matthew of Westvale. Also survived by his grandchildren Jarrod, A.J. (Vanessa), Kristen (Devon), Daniel, Casey, Ricky, Sean, Noah and Connor and great grandchildren Jackson, Riley and Ryder. He is also survived by his sister Judith Miller of Williamsport PA and several nephews and nieces. Private services were held at St. Charles Church and burial was at St. Mary’s Cemetery, Dewitt. A memorial celebration will be held for Dick at a later date. In lieu of flowers, contributions may be made to Honor Flight Syracuse, Inc., PO Box 591, Syracuse, NY 13209 (honorflightsyracuse.org) or Francis House, 108 Michaels Avenue Syracuse NY 13208.
Print
Online Memory & Photo Sharing Event
Online Event
About this Event