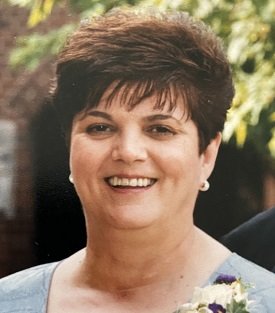 Please share a memory of Mary to include in a keepsake book for family and friends.
View Tribute Book
Mary Anne (Baratta) Tucker, of Syracuse, NY, passed away at Crouse Hospital on Saturday, April 4. Mary Anne was born on October 3, 1940 in Syracuse, NY. She was a graduate of Solvay High School and LeMoyne College, where she earned a Bachelor’s Degree in History in 1962. After college, Mary Anne worked for the Social Security Administration on Long Island. She married Robert F. Tucker, of Solvay, NY on October 2, 1965. They resided in Solvay for many years while raising a family. Later in life she was a familiar face behind the circulation desk of the Solvay Public Library. Mary Anne was an avid and talented knitter and crossword puzzle aficionado. She was also an accomplished cross stitch artist and a longtime member of the Central New York Embroiderer’s Guild of America. Undaunted by new technology and always hip to the news and culture of the day, she could call you from her Apple Watch to discuss the latest edition of New York magazine. She was most proud of maintaining a lifelong bond with a large and affectionate group of women she met while studying at LeMoyne. They referred to themselves as “Club” and met monthly for lunches and other special occasions for over fifty years. Mary Anne will always be remembered by friends and family for her kind and generous spirit. Mary Anne is predeceased by her parents, Anthony and Mary Baratta of Solvay, NY. She is survived by her husband, Robert F. Tucker, of Syracuse, NY, her two children, Karen A. Tucker (Brad Robinson), of Rochester, NY and Michael R. Tucker (Heidi) of Bath, ME, her brother, Anthony J. Baratta, Jr. (Donna) of Port St. Lucie, FL, her grandchildren, Kathryn E. Tucker and Owen J. Tucker of Bath, ME, her nieces Allison Baratta of Mount Laurel, NJ, Kristan Baratta Pavona, of Cohasset, MA, and Sara Tucker of Warren, VT, her nephews Kevin Tucker of Avon, NY and Brian Tucker of Palmetto, FL, as well as great-nieces, a great-nephew, and cousins. A memorial service will be planned at a later time. Mary Anne’s family is profoundly thankful for the compassionate care she received from the dedicated nurses, CNAs, doctors, and chaplains of Crouse Hospital’s 6 South team. Memorial contributions may be made in Mary Anne’s name to the Crouse Health Foundation, 736 Irving Ave., Syracuse, NY 13210 or at www.crouse.org/give
Print
Online Memory & Photo Sharing Event
Online Event
About this Event