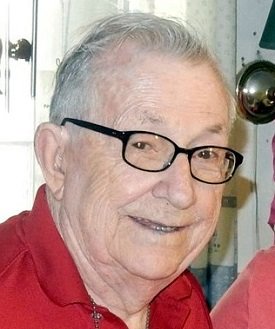 Please share a memory of Wallace to include in a keepsake book for family and friends.
View Tribute Book
Wallace Clifford “Wally” Ammon formerly of Tipp Hill passed away Monday, January 6, 2020 in Hanover, PA, after a long illness. He was born September 8, 1927, in Syracuse, to Lawrence and Nellie (Spillett) Ammon. He married Eleanor T. Chatterton on October 7, 1950, and she died September 12, 2012. Mr. Ammon retired in 1992 as comptroller of the Honeywell, formerly Allied Corp., chemical plant on Fells Point. He was a member of St. Agnes Church, Catonsville, where he had served as a corporator and on various parish committees. He was a US Navy veteran of World War II. He played semi-professional baseball and hockey in upstate New York during the late 1940s. He attended Syracuse University and was a graduate of the University of Baltimore. He was a coach for St. Agnes and EDRECO baseball teams and served as an adult leader of Boy Scout Troop 888 in Catonsville. He was a member of the Mt. St. Joseph High School father’s club. He is survived by a son, W. Keith Ammon, of Hanover, PA and a sister, Patricia (Richard) Binns of Camillus. Services: Calling hours will be 2-6 pm, Sunday, January 12 at the Sterling-Ashton-Schwab-Witzke Funeral Home of Catonsville, Inc., 1630 Edmondson Avenue, Catonsville, MD 21228. A Mass of Christian Burial will be celebrated 10AM, Monday, January 13 at St. Agnes Catholic Church, 5422 Old Frederick Road, Baltimore, MD 21229. Additional calling hours will be 4-7 pm Wednesday, January 15, at Tindall Funeral Home, 1921 W Genesee St. Syracuse, NY 13204. Interment 1 pm, Thursday, January 16 in St. Mary’s Cemetery, DeWitt, NY.
Print
Wednesday
15
January