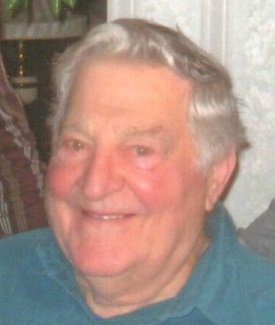 Robert N. Himpler, 96, of Solvay, passed away Tuesday at St. Camillus after a brief illness. Born in Solvay, he was a graduate of Solvay High School where he excelled in multiple sports and would later play with the Syracuse Bisons semi pro football team. He attended Syracuse University and Wofford College. Robert was a US Army Air Corps Veteran of WWII serving in the South Pacific. He married Dorothy White in 1943 while still in the service and they returned to Westvale where he would build their home and raise their family. Robert worked many years as a carpenter and was quick to help anyone in need of his skills. He loved hunting with his many dogs, bowling, fishing, gardening, being a family man, and mostly loved his kids.

He was predeceased by his wife, Dorothy in 2006; his oldest son, Rick in 2005; his siblings, Thelma, Mary Louise, Dorothy, Caroline, Frank, and Ed; son in law, Joseph Casion.

Services: 9:30 am Saturday at Tindall Funeral Home and 10 am at St. Charles Church where a Mass of Christian Burial will be celebrated. Burial with military honors will follow in Assumption Cemetery. Calling hours will be 4 to 7 pm Friday at the funeral home, 1921 W. Genesee St.

In lieu of flowers contributions may be made to the St. Charles-St. Ann Food Pantry, 4461 Onondaga Blvd, Syracuse, NY 13219.