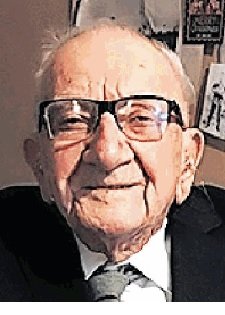 Please share a memory of Angelo to include in a keepsake book for family and friends.
View Tribute Book

Angelo P. Bordonaro, 100, passed away Tuesday, October 22, in Syracuse. He was born in Syracuse and raised in St. Louis before joining the Army in 1942 as Paratrooper with the 503rd PRTC. After the war, he returned to Syracuse, where he met the love of his life, Josephine. They lived in Camillus in a house he built himself. They were married 66 years. He worked 35 years at Prestolite, 11 years at Solvay Process, and was a dedicated member of the Taunton Volunteer Fire Department for 47 years, as well as a Captain with the Fire Police. But there was nothing more important than spending time with his family. He was a member of the 503rd Parachute Regimental Combat Team Association, WWII and the VFW. He recently participated in an Honor Flight to Washington, DC, and in June celebrated his 100th birthday. He enjoyed fishing, hunting, gardening, and was a communicant of The Church of St. Michael & St. Peter Church. Angelo's magnetic personality left an impression on everyone he met. He was widely respected and loved by all. Angelo accomplished everything he wanted to on earth and was more than ready to join his wife in heaven.

In lieu of flowers, donations can be made to Taunton Fire Department, 4300 Onondaga Blvd, Syracuse, NY 13219.