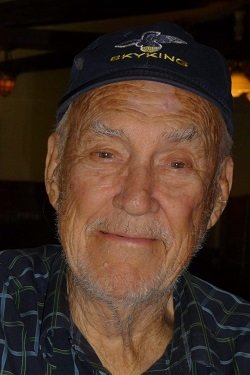 After a well lived life of 97 years, Hugh Pearson Papworth “jumped ship” and joined the love of his life, Annie Ophelia (deceased in 1971), on September 14, 2019. He lived his life on his terms and he left this earth on his terms, surrounded by his loving family. Born in Syracuse on July 20, 1922 to Edwin F. and Mary Jane Papworth, Hugh is survived by four of his six children. He suffered the loss of his dear sons Stephen Ward Papworth in 1996 and John Taylor Papworth (Cynthia) in 1998. He is survived by Hugh Jr. (Jodi), Edwin (Rebekah), Annie Ophelia (David Blakely) and Joy (John Townsend) and two stepdaughters, Cyndy Hiott (Ricky) and Kathleen Mungle. He is also survived by over 20 grandchildren, over 50 great grandchildren and one great great grandchild.

Hugh left Cornell to enlist in the US Air Force after the bombing of Pearl Harbor. He became a Pilot in Command in the 43rd Bomber squadron and flew 53 missions in the Pacific theater. He earned a purple heart (for three combat related injuries) and had additional commendations for saving his radio operator out of a plane about to blow up. He later worked as an engineer and invented a new hydrogen explosion-proof electrical connector for NASA’s space shuttles. He continued to be an inventor, a metallurgist and a building contractor. He worked ten years with the U.S. Agency for International Development in 27 countries of Africa, based out of Abidjan on the Ivory Coast. He loved puttering around and fixing things and was always resourceful in coming up with a plan. He was always very musical and loved to sing and play his violin. He was a member of the Clearwater Symphony Orchestra and sang with the Tampa Bay Opera Company.  He was always housing musicians and artists whenever they needed a place to stay.  Whatever church he attended, you could always hear his deep bass voice in the choir. His heart always had a special place for the Thousand Islands as he grew up a River Rat for nine decades and maintained a home there right up until his death. Hugh’s parent’s had been going to the St. Lawrence since the 1920’s, and in 1943 purchased “Nemahbin”, a large 8 bedroom home on the west end of Comfort Island. Many family reunions were enjoyed there and part of the island remains in the family today. Hugh also maintained his pilot’s license until his late 80’s. He flew his wife and two daughters across the U.S. in a Cessna 180 in 1970 and visited many of his “war buddies” along the way. Sailing was another favorite pastime and he jumped at the opportunity to do so right into his 90’s. Hugh was a man of faith and he attended church wherever he was. He was a strong supporter of the church in many ways. His favorite scripture was Corinthians 13:13…”And now these three remain; faith, hope and love. But the greatest of these is love”. Hugh’s greatest pride came from his family. His “girls” always took great care of him and we are all grateful that he was able to stay with Joy and John these last few years. It was only because of their commitment that he lived to be 97.

It was Dad’s wish to be buried at Arlington. When those details are available we will share them. There will be a celebration of his life on Sunday, November 3rd at Ophelia’s Garden Inn (Annie & David’s home) starting at 2:00 p.m. All are welcome to attend, share stories and just celebrate a life well lived.