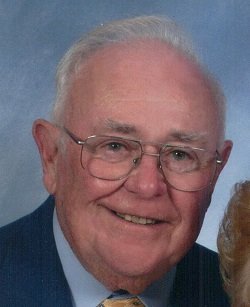 Obituary of William A. Waters

William A. Waters, 94, of Syracuse passed away peacefully at Francis House. Born in Syracuse he attended Solvay High School, Onondaga Community College, and American University. He was a US Marine Corps Veteran of World War II serving in the South Pacific and would later serve during the Korean War. He married his wife, Shirley Adsit Waters on July 14, 1945. Bill retired as an executive from Chrysler after 35 years. He was a communicant of St. Charles-St. Ann Parish. Bill was a Eagle Scout, Scout Master at St. Charles, CYO basketball coach, and leader of Junior Achievement in Syracuse. He was a member of the Hilltop Club in Solvay, Solvay-Geddes Vets, the VFW Post 2893, and the Navy Explosive Ordinance Disposal Association.

Services: 9:30 am Friday, September 7, at Tindall Funeral Home and 10 am at St. Charles Church where a Mass of Christian Burial will be celebrated. Burial with military honors will follow in St. Mary's Cemetery DeWitt. Calling hours will be 1 to 3 pm and 5 to 7 pm Thursday, September 6, at the funeral home 1921 W Genesee St., Syracuse.

In lieu of flowers, contributions may be made to the St. Charles-St. Ann Food Pantry, 4461 Onondaga Blvd. Syracuse, NY 13219.