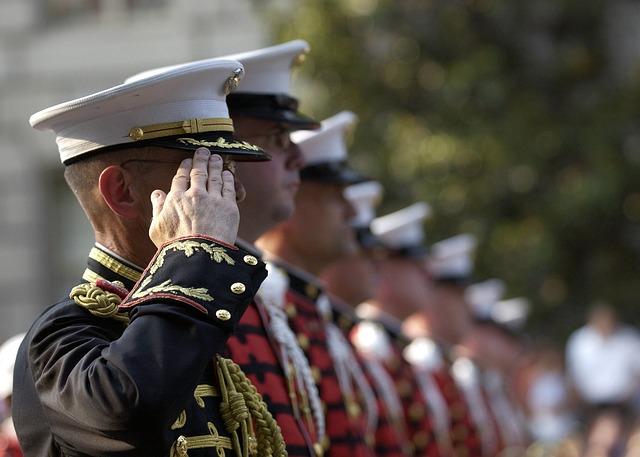 The United States of America offers military honors upon family’s requests for every eligible veteran. They provide a dignified military funeral with full honors at no cost as a way to show the nations profound appreciation to the veterans who have served our country, faithfully and courageously. At a minimum of a two person uniformed detail to honor the veteran who has passed away, there are a series of events that take place, alongside the immediate family of the deceased.

The program inaugurated is referred to as “Honoring Those Who Serve” and the following are performed in this ceremony at graveside:

The honor guards will fold the American flag and the highest ranking officer, usually being the veterans parent service rep, will present the flag to the next of kin or in some cases, the family.

On the day the burial takes place, the U.S flag is lowered to half-mast to honor the veteran and pay the nations respect. As the ceremony comes to an end, salutes show the honor and respect given to the veteran who has sacrificed their life in service.

Although some differences may appear in ceremonies held by a private service, in which some cases the funeral home may handle some duties, every detail of the ceremony is fulfilled with deep condolences and a dignified military service the veteran is entitled to have for their dedication and sacrifice.

If you have any questions or would like to speak to the professionals at Tindall Funeral Home, you can contact us here.

Please wait No comments have been left yet.
Please wait

Comfort Food Ideas For The Grieving

When someone is grieving, the last thing on their mind is food. In times of acute grief, it is very typical to skip meals or consume lesser quantities, affecting the mourning person's phy...

Managing Grief During The Holidays

Happy family, delectable food, and exquisitely wrapped presents make holidays cheerful and amazing, but not always. If you have recently lost a dear one, navigating this period may be quite di...

Life is full of lovely and inspiring things, but it is also full of loss. The loss of a loved one might elicit strong feelings of melancholy. At Tindall Funeral Home, we have seen that bereavement ...

How To Talk To Your Loved One's About Your Final Wishes

While virtually everybody agrees on the critical nature of revealing one's ultimate wishes, only approximately 1 in 5 individuals will ever communicate with their loved ones. After completing your ...

How To Keep Your Loved One’s Closer To Your Heart

If someone you care about has suddenly passed away, there are some methods to keep him or her close to your heart. Tindall Funeral Home believes that there are numerous ways to accomplish this...

Why Losing A Pet Can Be So Difficult

For thousands of years, people have had animal companions. Historically, pets played many roles; they served as defenders, herders, and hunting partners. Pets are now becoming an integral elem...

What Do I Do With The Ashes After Cremation?

In the case of cremation, the decedent’s family has to decide what they want to do with the ashes. Some people preplan their cremation and mention this aspect in the contract and the family can fol...

Meaningful Gift Ideas For Someone Who Has Recently Lost Someone

When a person is grieving, they require some support from people around them. Dealing with the death of someone in the family can be a challenging phase. At Tindall Funeral Home, we have seen that ...

4 Types Of Cremation: Understanding The Differences

After a person’s death, you can either bury or cremate the body. The former is the conventional way to dispose of the body and cremation is a relatively new concept. At Tindall Funeral Home, we hav...